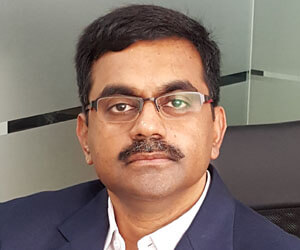 Major Ajay Mallapurkar (Retd.) is an alumnus of the ‘National Defence Academy’ and is the ‘National Topper’, UPSC examination 1988. He served in the elite fighting arm of the Indian army from 1989 to 2000 and led troops in various ‘field’ operations including ‘Siachen Glacier’ and insurgency areas of Nagaland & Assam.

In the year 2000, he took premature retirement from the defence services and pursued an MBA in HR from XLRI (Jamshedpur) where he was a medallist and rank holder. He joined ‘Mafoi’ from campus in 2002 and soon rose to become the CEO of ‘Mafoi Consulting Solutions Limited’. He also led its IT subsidiary Minvesta Infotech as its CEO from 2007 to 2010. While at work he also earned the coveted ‘Charter of Financial Analyst’ from CFA institute (Virginia-USA).

Later in March 2010, he joined hands with a private equity firm and assumed the position of CEO of ‘Oriental Cuisines’ a multi-cuisine, multi-format hospitality chain running more than 150 outlets across India. He has recently existed from this investment to set up his own venture in vocational education, ‘Earnest HR’ (www.earnesthr.com). Earnest HR is a training partner of Tata Institute of Social Sciences- SVE as well as a funded partner of the National Skill Development Corporation. Ajay is also the principal consultant with Tata Institute of Social Sciences and is working on the design and setting up of the school of Vocational Education eco-system.