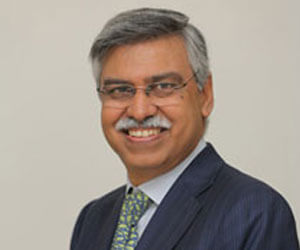 Mr. Sunil Kant Munjal is a senior member of the $ 5.6 billion Hero Group and is responsible for developing growth strategy and implementation of new business plans for the Group. He was selected by ‘India Today’-India’s largest English newsmagazine, as one of the “Faces of the Millennium” for business. He has received GlobScot Award from the Scottish Government in Sept., 2012. His name has been inscribed on The Royal Society of Medicine’s Wall of Honour at London in recognition of his contribution in Affordable Healthcare as President of DMCH. Ludhiana in February, 2013.

Management responsibilities: He is the Chairman The Hero Enterprise. He is responsible for chartering the course for entire Group’s development including strategy, plans and performance. Mr Sunil Kant Munjal is the Founder Chairman of BML Educorp Services and is the guiding force behind the BML Munjal University and is playing a key role in helping create a unique Higher Education Initiative. He is the Chancellor of BML Munjal University which has started in August 2014.

Board level responsibilities: Mr Munjal sits on the boards of a large number of Hero Group companies. In addition, Mr. Munjal is on the boards of DCM Shriram Consolidated, a multi-product conglomerate with interests in sugar, chemicals and fertilisers, the Coca Cola India Advisory Board and the Bharti Foundation, the social service arm of Airtel, India’s largest private sector telecom company. He is on the boards of the Indian School of Business at Hyderabad and Mohali. He is Member of the Board of Governors of IIT, Ropar in Punjab. He also serves on the President’s Council at the University of Tokyo, one of the oldest and most revered institutions in Japan. He has been appointed as Chairman of the Board of Governors of Punjab Technical University, Jalandhar by the Punjab Govt. in October, 2012. He is Member of the Advisory Board of the UK India Business Council.

In the past, Mr. Munjal has been on the boards of India’s largest life insurance company, Life Insurance Corporation of India Ltd, and PNB Gilts Ltd, India’s only listed gilt trading company.

Industry responsibilities: Mr. Munjal was President of Confederation of Indian Industry (CII), India’s premier business association, for the year 2004-05. He continues to be actively involved in the Confederation’s various programs at a strategic and intellectual level, and heads the national council for economic policy.

Policy responsibilities: Mr. Munjal has made significant contributions to the economic reform process in India. He is currently a member of Prime Minister’s Council on Trade & Industry that regularly interacts with the Indian Prime Minister on economic issues. Mr. Munjal has also been involved in the preparation of a number of socio-economic reports in the areas of skill development, vocational training, CSR and tribal development.

Previous assignments: Mr. Munjal has been a member of the Narasimham Committee that was set up in the 1990s to chart a course for banking and financial sector reforms in India. He was also part of a committee set up by India’s Central Bank, the Reserve Bank of India to study the role of directors on Indian banks and financial institutions. At the Central Government, he was a member of the Taskforce on Indirect Taxes (Kelkar Committee). He also chaired the Study Group on Skill Development, Training and Workers’ Education constituted under the Second National Commission on Labour Reforms. He was also member of the Northern Regional Advisory Committee of The Industrial Development Bank of India. He has also been a member of the consultative groups on industry and external sector set up by the Planning Commission. Besides these roles, Mr Munjal has also been involved in Track II Diplomacy initiatives with a number of countries.

Mr Munjal is married and has a daughter who is also involved in the Group business.