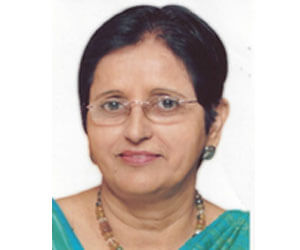 Jatinder Peters, former GGM (HR) and Chief Corporate Affairs of ONGC at Delhi is a multifaceted personality. She had excellent academic career, being first class throughout and completed her studies with National Science Talent Scholarship. Although she trained as an organic Chemist from Delhi University and a life scientist from JNU, she also completed management studies, which helped her work as a scientist and later move over to Human Resource Department in ONGC. Mrs. Peters has been first woman to hold many of the varied assignments including Head of Industrial Relations, heading an Institute on Vocational Training and being MD of a joint venture company of ONGC and IOC. She also has a Patent to her name.

Women’s issues have been close to her heart and she has contributed to women empowerment through her association with various bodies like Women Development Forums in ONGC (Chairperson), Women in Leadership (Board Member), AIMA Women’s Conference (Steering Committee Member). She has won many awards and accolades.

Mrs Peters is a Certified Gender Auditor from ILO as well as a Certified Coach besides being an Assessor for Assessment Development Centers. She is associated in conducting ADCs for ONGC to help in succession planning by preparing executives to take up top roles.

She has presented papers and has been panelist/ chairperson at different conferences, seminars and workshops and also contributed articles in magazines and journals on Technical, HR and Women’s Issues, both in India and overseas.

Jatinder Peters is a keen painter, artist and is trained in Bonsai Making Art. Her latest foray is in learning to play guitar.

She has won many laurels and awards, latest one was received in the Category of Leading woman leader in Public Sector.

Her interviews have appeared in various magazines such as Geoexpro, USA, People Matters and latest one in Governance Now.

Presently, Mrs Peters is working as Secretary, Petrotech, a society whose members are the major oil/gas/power companies of India. Society is engaged in holding International Conferences, organizing Technical and Management programs besides bringing out Technical Publications. In addition Petrotech is facilitating Industry Academia Interface for developing Talent Pipeline for more suitable future workforce for the Industry. As secretary it is Mrs Peters responsibility in developing and executing training programs, publications as well as helping in organization of international and national conferences.